Are You Putting Your Skin in Jeopardy During the Summer Months? 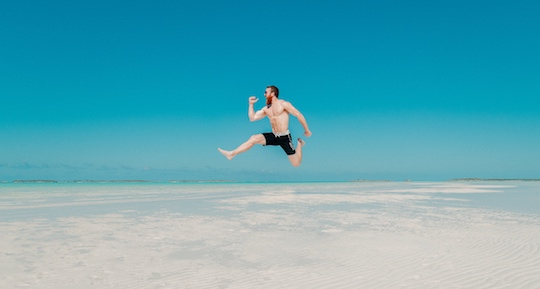 With summer officially here, we’re all thinking about beach vacations, picnics in the park, and days spent soaking up the sun. Ahhhh, bliss. Well…not to be a big buzzkill, but this also means we need to talk about a pretty serious topic – skin cancer. As men, we have lower rates of survival from melanoma than women because our skin is thicker, but also because we tend to be less aware of it. When detected and treated early, however, you have a fighting chance against skin cancer. But why even put yourself in the position? Healthy sun habits can help reduce the risk of developing issues in the first place.

Let’s spend a day in the sun with our two friends Joe and Jim. Both are fit, eat healthy, take good care of themselves, and generally care about their level of attractiveness to potential suitors. They’re spending a Sunday at the lake with friends, and each has a different approach when it comes to sun protection.

Both are smart enough to know extended sun exposure can cause skin damage. Joe puts on an SPF 15 before heading out and thinks he’s set for the day. Jim, wanting to get a hint of that sun-kissed color, skips the SPF, but grabs his hat and a long-sleeve shirt to wear later in the day. Who’s making the smarter choice?

Ideally, a combination of two would be best, however each could stand to make a couple improvements. Joe should step up to an SPF 30 and needs to be sure his sunscreen offers broad spectrum protection, meaning it effectively blocks both UVA and UVB rays. Not only that, it needs to be reapplied every couple of hours – especially when he’s out on the water where reflections make the sun even more powerful.

Jim is taking a step in the right direction with the hat and long-sleeve shirt, but even early morning sun can cause damage, so be wary the trap of believing only midday sun is harmful. The best bet is daily (and several times throughout the day) application of natural mineral blocker, even when you’re not anticipating extended sun exposure. For a whole day outside, it’s a must.

Now let’s look at the beverages that are so often synonymous with lazy summer days. Studies have shown alcohol consumption can increase the skin’s sensitivity to UV rays, which means you could sunburn more quickly, which ultimately increases the chances of skin cancer at worst, and the premature appearance of aging at best. It can also be dehydrating, which is never a recipe for great skin. Be mindful of what you’re putting into and onto your body. Plenty of water and sunscreen, while it may not sound as fun, is a good combination this time of year.

Don’t be afraid to get out and enjoy the weather (our bodies do need some sun), but don’t let the allure of the tan or superhero bravado get in the way the making smart decisions for your skin. You’ll be grateful your chose the sensible route later in life.